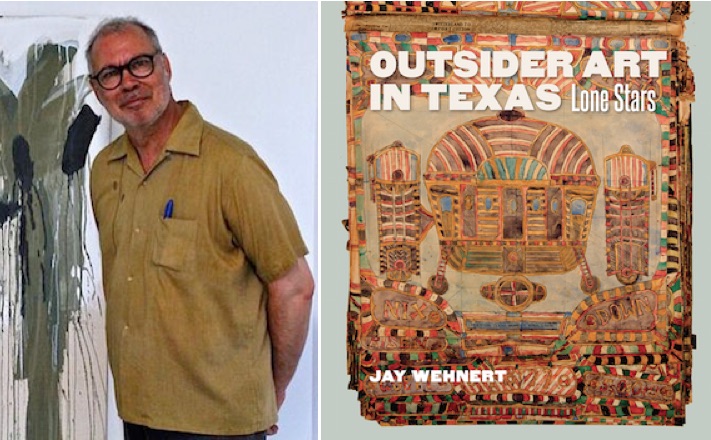 In Outsider Art in Texas: Lone Stars, author Jay Wehnert -- Thorne Dreyer's guest on Rag Radio -- takes readers on a visually stunning excursion through the lives and work of 11 outsider artists from Texas, a state particularly rich in outsider artists of national and international renown.

Outsider artists live and create on the fringes of culture and society. Generally removed from the influence of place, they prefer instead to chart their own, intensely personal, interior landscapes. They usually have little awareness of or connection to the mainstream art world or its history, and they typically possess limited intention that their work will have an audience or find a place in the broader landscape of art.

Woven through the lives and work of outsider artists is a common thread of
isolation. This isolation may be psychological, cultural, socioeconomic, geographical, racial, or institutionally imposed. Circumstances of life, chosen or not, have placed these artists apart. However, these artists, like their formally trained peers, find that they are compelled to make art; it is essential to their lives as a manifestation of their personal histories, societal and cultural forces, and an unfailing drive to express themselves.

Jay Wehnert is the director of Intuitive Eye, a Houston arts organization he founded in 2011. An independent curator, writer, collector, educator, and collaborator in a wide range of venues, he has curated shows for galleries and institutions in Texas, written for exhibition catalogues and other publications as well as his own website, presented at conferences, and worked directly with artists to present their art in a variety of settings. He resides in Houston, Texas.
Rag Radio is produced in the studios of KOOP 91.7-FM, an all-volunteer, cooperatively-run, solar powered community radio station in Austin, Texas, in association with The Rag Blog and the New Journalism Project, a Texas 501(c)(3) nonprofit. It is streamed live on the Internet at KOOP.org and Radio Free America. The host and producer of Rag Radio, Thorne Dreyer, is a prominent Austin-based activist and writer who was a pioneer of the ’60s underground press movement. The show’s engineer and co-producer is Tracey Schulz and the staff photographer is Roger Baker; Suzy Shelor is Rag Radio associate; Alice Embree is guest host; and Glenn Smith is our political analyst. The syndicated show is broadcast (and streamed) live Fridays, 2-3 p.m. Central) on KOOP, and is later rebroadcast and streamed on WFTE-FM in Mt. Cobb and Scranton, PA., on Houston Pacifica's KPFT HD-3 90.1, by KKRN, 88.5-FM in Round Mountain, CA, and at WALHRadio.com in Wilmington, OH -- and as a featured podcast at Veterans Today. Learn more about Rag Radio here.